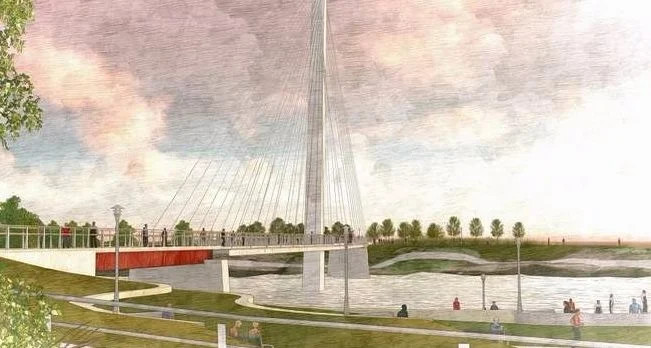 When settlers first arrived in the area that would become Cedar Rapids, the river was both an asset and an obstacle. While the flowing water could power damns and provide power for the mills and factories that grew up along its banks, it was challenging to cross. As companies like Quaker Oats created new jobs, which in turn led to more development and more people moving to the area, it eventually became necessary to build a bridge.

The first permanent bridge was built in 1871, where the Third Avenue Bridge now stands. Shortly thereafter, the original F Avenue NW/B Avenue NE bridge was built. Then, in 1885, the First Avenue Bridge was erected. We could go on, but the point is that bridge construction has been steady and constant throughout the city’s history.

And two decades into the 21st century, Cedar Rapids might get a new, very modern foot bridge.

It’s ironic that one of most destructive events in our history, the 2008 flood, would lead to a massive effort of revitalization and beautification of the city.

Following the flood, one of the largest and most notable projects was the development of the green space along the waterfront. Both practical and aesthetically pleasing, this large park area will absorb water and could prevent future flooding. In the meantime, it serves as a prime recreational area, complete with a city promenade and river amphitheater.

Additionally, part of this riverside makeover may involve a pretty slick-looking bridge for bicyclists, joggers and more.

In the past few years, you may have noticed the torn-up remains of an old railway bridge. The twisted iron and cement foundations of the railway bridge are not exactly a pleasant sight. But now all that might change. The Cedar Rapids Gazette reports that a proposal to build a 600-foot pedestrian and bike bridge is in the works.

Just east of New Bohemia and Czech Village, this bridge will connect trails on either side of the river. On the south-side, it will pass right under our own natural wonder, and site of ongoing renovation, Mount Trashmore.

In Cedar Rapids and thousands of other cites, bridges have been the means to connect and build. This new pedestrian bridge will represent another step to energize our city and get people outside.

To learn more about the many great things going on in Cedar Rapids, talk to a Coldwell Banker Hedges Realtor® today.